ArtsPost is dedicated to developing and promoting artists, and to growing a dynamic and supportive environment for the arts in the Waikato. Located in a beautifully preserved heritage building next to Waikato Museum in Hamilton's Victoria Street, this former Post Office is now a stunning visual art space which offers a unique gallery and retail experience.

To grow a dynamic and supportive environment for the arts in Waikato. 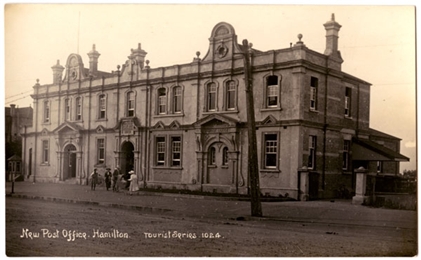 Hamilton’s new Post and Telegraph office was built in 1901, and was a prominent feature of the new town.  It was a grand building, symbolic of Hamilton’s growth, and located in the hub of the action. Replacing the wooden structure that burnt down in 1899, the solid building was designed by architect John Campbell. It stood proud in Imperial Baroque style and was built for a cost of £2400.

The building was extended by half in 1916 to meet the demand for more facilities, and remained the central post office until 1940 when its replacement opposite Garden Place opened. For the next 40 years the building was used for Social Welfare purposes. From 1980 various other tenants including the Maori Land Court, local Members of Parliament and Matua Whangai - Youth Resource Centre all made use of what was once the bustling post office in our young town.

Hamilton City Council purchased the building in 1992 with the vision of creating a high profile facility for the promotion of visual arts, while retaining one of the city’s historic buildings. In consultation with the Historic Places Trust, the building was restored as much as possible to original condition, while complying with current building codes.

The renovated building was opened as ArtsPost on June 27,1998. This initiative led to a Creative Places Award for Hamilton in 1999.