Home / About us » Our history

Hamilton City and the surrounding districts were developed on the traditional lands of several of Waikato Tainui hapu. Below the area where this museum now stands there was a waka landing site that was called Te Korokoro. This site got its name from a fresh water spring that was said to have curative powers. Wakas were often beached at Te Korokoro to be repaired.

There were areas of flax that grew right up to the riverbank and there was a creek that ran directly below the museum, which had on either side, steep valleys covered in kowhai. Before human habitation there would have been a dense forest of kahikatea, tawa and matai along each side of the river. The yellow kowhai lining the river bank were described by George Angus as a massive yellow and gold wall creating a river that was awash with yellow petals.The area was renowned for its fertile soil which was perfect for growing food crops, with peaches and potatoes in abundance. Immediately opposite the museum, there was a pa called Tetarahi which was owned by a sub-tribe of Ngati Wairere called Parekirangi. When British settlers arrived in the area they altered the defence features of the pa to build a redoubt.

By 1868 there were two Hamilton settlements on the east and west sides of the river. Clustered around the ferry bank area and stretching up to the corner of Grantham and Victoria Streets the first Central Business District for Hamilton developed. 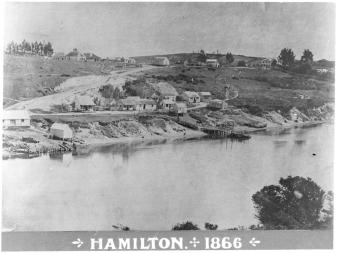 Image: A view of the beginnings of the Hamilton settlement on the west side of the river, as seen from the east side (probably Moule's Redoubt), c. 1866, Collection of Hamilton City Libraries HCL_00480

Helen Bell, a local benefactor and supporter of the arts, gifted a building to The Waikato Society of Arts in 1941 for use as a museum and art gallery.

In 1948 The Waikato Society of Arts went on to establish The Waikato Art Gallery. The arts society shared this small space with a photographic group. It received a minute grant each year from the council to buy exhibition pieces. Initially housed in cramped facilities in a small aging building at the junction of Grantham and Victoria Streets it only had 100m2 of gallery space.

In 1965 The Waikato Museum was founded on the top floor of the Hamilton Public Library and had 1000m2 of space. Both of these venues were unsatisfactory.

In 1971 a joint report of museum and art gallery staff set out amalgamation benefits of the two facilities.

In 1972 The Hamilton City Council determined the two facilities merge to become one, The Waikato Art Museum on Grantham Street incorporating the site of the old Waikato Art Gallery and adjacent land.

In 1973 The Waikato Art Museum moved to the 1400m2 space on the top floor of the PSIS Investment House on London Street.

In 1978 a feasibility study was commissioned to determine the most suitable location and development type for the new premises for The Waikato Art Museum.

In 1982  Hamilton City Council decided to proceed with the planning and construction of the new premises on the Grantham Street site. 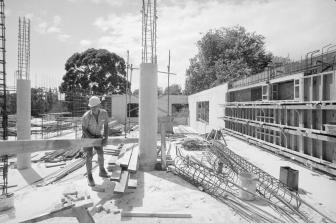 Image: Construction of the Waikato Museum of Art and History, 1985, Collection of Hamilton City Libraries HCL_M01363.18 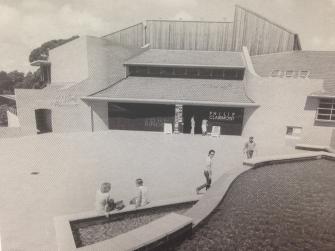 Image: The completed Waikato Museum of Art and History during its first year of operation, c. 1988, Collection of Hamilton City Libraries HCL_M02164.3

The interior and exterior reflect and respect the areas heritage and environment. The building's design was influenced by the steep drop of  the riverbank towards which it orients, forming part of the river enhancement programme.

The citation from the judges noted:“One of Hamilton’s most important new buildings clearly tackled with imagination and vigour. A challenging site and diversity of planning requirements have been synthesised into an innovative piece of design which has many memorable features. The architects have given Hamilton city and the Waikato a unique, one-off museum building.”

Jasmax also designed Te Papa Tongarewa Museum of New Zealand in Wellington for which they received a Resene Northern Regional Award for Architecture and the 1999 DuPont Antron Design Award.