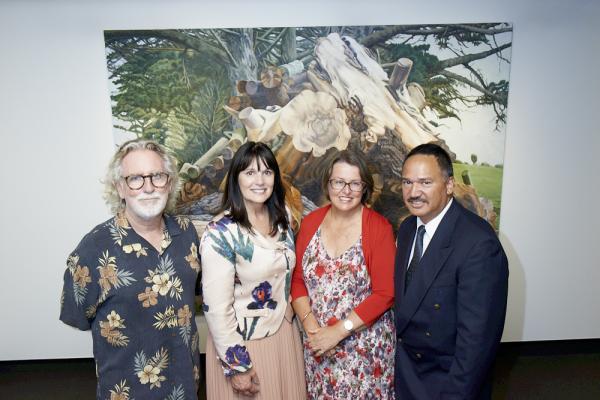 Trust Waikato has donated its $1.92 million art collection to Hamilton City Council and expects to help purchase future artworks of value to the region.

The Trust Waikato Art and Taonga Collection is housed at Waikato Museum which is owned and operated by Hamilton City Council. The Trust decided it made sense for the Council to own the Collection.

Trust Waikato chair Niwa Nuri said that Trust Waikato had made the decision many years ago to purchase important regional artworks to keep them in the region.

“When the Trust reviewed this work recently, we recognised the skills and expertise of Waikato Museum in collecting art and taonga. We decided that it made more sense to support the Museum’s expertise by gifting the Collection and supporting them to add to it.”

“As a result we believe that the Collection rightly belongs in the care of Waikato Museum and that our future role will be to support the Museum in purchasing important regional artworks as and when it is appropriate to do so,” says Niwa Nuri.

Mayor Julie Hardaker said the Council was delighted to accept the Collection on behalf of the community.

“This is a significant Collection and the city is thrilled to now be the custodian of it. We have a strong partnership relationship with Trust Waikato and extend our thanks to them for their continuing support of the Arts.”

Waikato Museum director Cherie Meecham says, “Waikato Museum has enjoyed a long and highly valued relationship with Trust Waikato, who have been integral in supporting the arts and culture offer at this Museum, and across the Waikato region. The gift of this Collection, in which most of the works have some link to Tainui tangata whenua, the land, the river, our colonial past and the rich history of the Waikato region, is invaluable to this Museum and our visitors.”

The noteworthy Collection, comprises more than 260 pieces, each carefully selected for its significance to the region. Included in the Collection are paintings by artists such as Dick Frizzell, Michael Smither and Ida Carey, as well as sculptures, taonga and mixed media.
Trust Waikato is a charitable trust that donates to not-for-profit community groups in the Waikato. It has an art policy that aims to preserve significant art and taonga in the region that form part of our rich culture and artistic heritage.