Sculpture of Maaori King to be unveiled 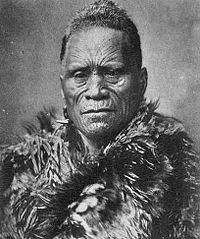 A bronze sculpture of the second Maaori king will be unveiled on Monday 17 August, in a special ceremony at Waikato Museum Te Whare Taonga o Waikato.

The sculpture, by noted New Zealand artist Gary Schofield, is of Kiingi Taawhiao Matutaera Potatau Te Wherowhero (c. 1825-1894), and has been in the care of Waikato Museum, pending a formal unveiling. Mr Schofield, who now lives in the USA, had always planned to gift it to Hamilton to mark the city's 150th.

Over the last 18 months, Hamilton City Council has been working with Kiingi Tuheitia's office to arrange the unveiling of the sculpture, which Mr Schofield created in the 1980s. Mr Schofield and Kiingi Tuheitia were at school together at Southwell School.

"We are pleased to be able to unveil this fine artwork of Kiingi Taawhiao for the people of Hamilton to mark the city's 150th anniversary. To have it on display at Waikato Museum near other Tainui taonga is a reflection of our connection to this whenua and its people," he says.

Mayor Julie Hardaker welcomed the presentation of the artwork and says it marks an historic moment for the city.

"Kiingi Taawhiao was a very significant iwi leader in our region and he was a vocal proponent of unity among Waikato hapu. That philosophy of unity will be further enhanced by Monday's unveiling," Mayor Hardaker says.

The unveiling takes place next week as Mr Schofield will be in the country for a few weeks to visit family and will be attending the event.