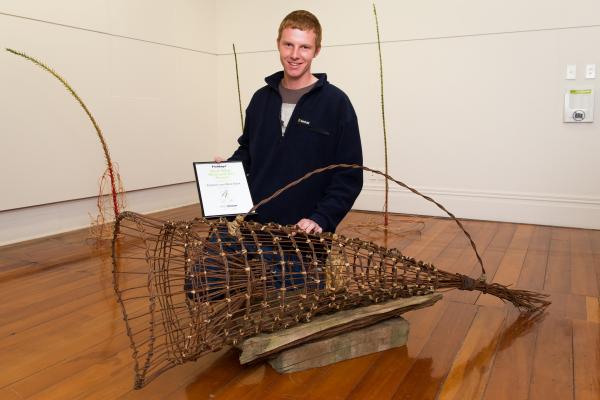 A hinaki made of rusty No.8 wire and flax has won the major prize in the 2014 Fieldays No.8 Wire National Art Award. Artists Dagmar and Nick Elliott took out the $8,000 prize for their entry Rustic Hinaki at the awards ceremony sponsored by Fieldays and held at ArtsPost last night.

Helensville-based metal sculptor, Jeff Thomson was placed second for his entry Ladders and William Jamieson from Napier was placed third for War & Peace.

This year’s judge, Greer Twiss says the winners in this year’s award exhibition stood out for him as “they spoke of wire.”

"I made my choice from entries that recognised the implications of No.8 wire. They have what I like to call ad-hocism,” he said.

Greer Twiss is an acclaimed Auckland based sculptor who has exhibited for more than 50 years. Known as New Zealand’s ‘godfather’ of contemporary sculpture, Twiss admits to never having worked solely with no.8 wire but says it is a material that has real quality.

“No.8 wire is an iconic concept material. The romantic implications of its use go far beyond the reality of the farm fence,” he said.

The Fieldays No.8 Wire National Art Award was launched in 1997 by the New Zealand Fieldays Society. It has been shown at various venues in the greater Waikato including Waikato Museum (1997-1999), Te Awamutu Museum (2003-2004) and Lake Taupo Museum (2005). Since 2006, the award has been administered by Waikato Museum and shown at ArtsPost Galleries & Shop to coincide with the launch of the annual Fieldays event.

Jon Calder, NZ National Fieldays CEO said he was very proud of the Society’s longstanding relationship with Waikato Museum and that the Fieldays No.8 Wire National Art Award was a highlight in the build up to Fieldays.

“The No.8 Wire National Art Award prize giving ceremony, including the announcement of the Fieldays Society President’s Award, is the first major event of the Fieldays season and we encourage all Fieldays visitors to take in the free exhibition held at ArtsPost during Fieldays and up to 7 July.”

The finalists' work will be exhibited at ArtsPost Galleries & Shop at 120 Victoria Street, Hamilton from Friday 6 June until Monday 7 July 2014. Entry is free.