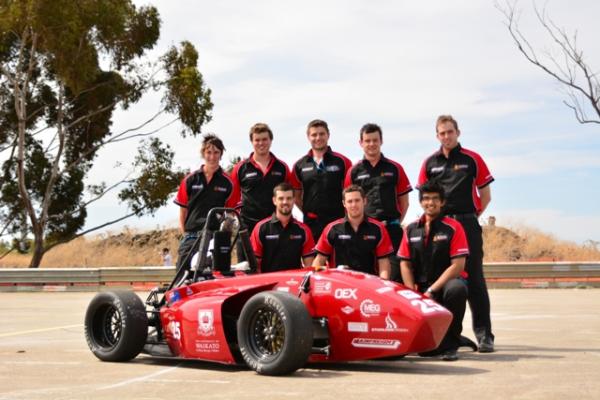 A formula-style race car designed, built and raced by University of Waikato students will feature in a new exhibit in Waikato Museum’s Exscite interactive science gallery from 17 March until 9 May this year.

University of Waikato Engineering and Design students have worked with Waikato Museum curator Salina Ghazally to develop the display to give Exscite visitors an insight into the project development of the car and the science of racing.

“We are very excited to have the university students’ car here on display. It not only puts in perspective the fundamental physics in race car sports, but also celebrates the calibre of science happening at our local university.

“Visitors will be able to explore the challenges of weight, aerodynamics, steering, safety and downforce in relation to achieving speed in a race car, as well as view the car itself,” said Ms Ghazally.

The car was ranked sixth overall and the top New Zealand entrant among more than 20 competitors from Australia, New Zealand, Japan and England in the annual Formula SAE (Society of Automotive Engineers) race in Melbourne on 10 December 2013. University of Waikato senior lecturer in engineering, Dr Mark Lay says the display is a great opportunity to share the work of the University engineering team and acknowledge the sponsors that have supported the Waikato Engineering Student Motorsport Organisation (WESMO) team over the years. “I hope this will inspire more students to consider engineering as a career.” Waikato Museum director Cherie Meecham says partnerships like this one are an investment in the Museum’s role in sharing the stories of the Waikato community.

“We look forward to forging future relationships with the University of Waikato as we develop and grow our science and technology offer here at Waikato Museum.”

Exscite science gallery is open seven days from 10am – 4.30pm. The admission fee includes entry to Planet Warriors, an interactive eco-exhibition developed to challenge visitors to learn how small changes can change the planet we live in.