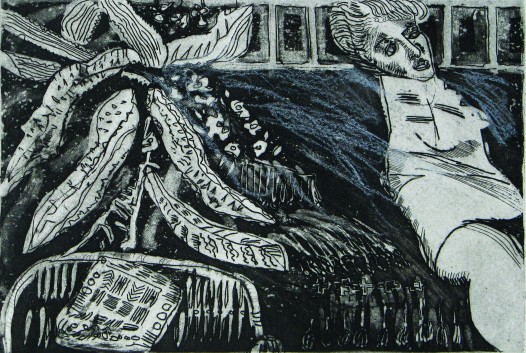 The exhibition exemplifies the range of Davey’s art and showcases her creative skills in a multitude of printmaking techniques, from etching to lithography.

Davey was born in 1923 and moved to Hamilton in 1960 where she first took to printmaking. In 1973 she helped establish printmaking classes at WSA School of Arts, teaching until the mid-1990s. She is now a life member of the Waikato Society of Arts, Friends of the Waikato Museum and Print Council Aotearoa New Zealand.

With a career spanning six decades, Davey is a longtime stalwart of the Hamilton arts scene. Waikato Museum has already featured two of Davey’s survey exhibitions – Signs and Symbols in 1988 and Signs of Life in 1996.

The new exhibition features more than 50 of Davey’s works and covers a diverse range of subject matter. The artworks in the show explore Davey’s interest in culture, music, literature, people and the physical environment and range from figurative to symbolic and abstract.

Waikato Museum Director Cherie Meecham said the exhibition is a unique opportunity for visitors to experience the ethereal and engaging works of one of New Zealand’s most prolific and influential printmakers. “This exhibition celebrates the life and works of an iconic Waikato artist who has paved the way for generations of printmakers,” she said. “It’s a privilege to be hosting a showcase of Ruth Davey’s expressive works, which are both poignantly local and engaged in an international dialogue with music, literature and the craft of printmaking itself.”

Curator Nadia Gush said Ruth Davey is a leading artist whose tremendous contribution to the region deserves to be celebrated. “Since rising to national attention, Ruth Davey has tested the boundaries of printmaking as a conceptual and expressive practice,” she said. “To do her career justice and to give our audience a rare opportunity to step inside her world view, we had to push our own boundaries to put together this extraordinary showcase in her honour.”

On the banks of the Waikato River, in the heart of Hamilton's CBD, Waikato Museum's 13 galleries feature more than 25 new exhibitions and 100 public events annually. Details of all exhibitions are available at waikatomuseum.co.nz