The Jurisich Experience at Waikato Museum 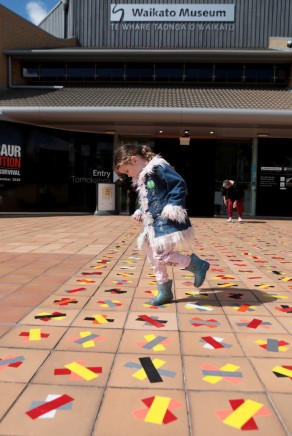 Hamilton-based artist Gaye Jurisich has developed an international reputation for creating large-scale art installations and now she has created four new ones for a special exhibition at Waikato Museum.

‘The Jurisich Experience: In-situ Installations by Gaye Jurisich’ is now open and runs until Sunday 1 November.

Children have already started having fun interacting with one of her installations on the Museum’s forecourt called ‘Gathering’ – a colourful piece that entices young visitors to hop from tile to tile as they make their way in to the Museum.

‘Long Long Summer’ - a huge yellow waterfall of compostable strips made from cornflour starch - greets visitors in the museum foyer and draws your eyes up to another work of yellow powder-coated steel ‘Carcass’ hanging from the vaulted ceiling. A fourth installation, ‘Still’, employs multiple strands of fine white and black twine that stretch across the full expanse of The Barry Hopkins Gallery, inviting contemplation.

Inspired by mid-20th century land artists forging a new type of outdoor sculptural art in the United States and Europe, Ms Jurisich has been creating and exhibiting large-scale land installations for the past 15 years in New Zealand, Australia and the United States. She has created extensive works for NZ Sculpture OnShore, Devonport, and Sculpture on the Gulf, Waiheke Island, and has been invited to exhibit at similar events overseas. She was winner of the Fieldays No.8 Wire National Art Award in 2019 with a work called ‘Snare’.

Her passion is to create works that awaken people to the world around them.

She prefers to work outdoors, but refines her ideas according to the space she has to use, choosing from a range of materials from twine and ribbon to sticks and wire – even using flour for a recent ‘guerilla art’ event on Westmere Beach.  “It went solid and stayed in place for more than a day before the tide and hungry birds carried it away,” she says.

Waikato Museum Director Cherie Meecham says, “We’re delighted to have this opportunity to feature Gaye Jurisich’s work at Waikato Museum and I encourage visitors to come here to experience it.”