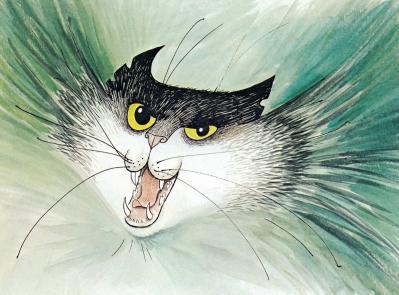 Scarface Claw, the roughest and toughest, boldest and bravest of cats, takes centre stage at Waikato Museum in an exhibition dedicated to the villain of the Hairy Maclary and FriendsTM book series.

Waikato Museum is the first venue in New Zealand to host The Life and Times of Scarface Claw, which opens this Friday 25 January 2019.

“I am delighted that Scarface Claw is having an outing to Waikato Museum, which is not too far from my hometown of Tauranga,” says Dame Lynley.

Also included in the exhibition is the artwork and text from Scarface’s latest misadventure, Scarface Claw, Hold Tight! Published in 2017, the book is based on a real-life cliff-hanger which finds Scarface far from home.

As well as the paintings by Dame Lynley, visitors to the exhibition can view the celebrated author’s research, preliminary drawings, and preparatory work she does to produce a picture book.

Waikato Museum Director Cherie Meecham says Dame Lynley’s books have been a mainstay of growing up in New Zealand for more than 30 years.

“From current fans to those whose childhood included Hairy Maclary, Scarface Claw, Bottomley Potts, Hercules Morse and the rest of the gang, this exhibition has cross-generational appeal,” she says.“It also gives an insight into the art of storytelling and the career of a writer and illustrator, so will be valuable for school visits from many year levels.”

The Life and Times of Scarface Claw was originally curated by art historian Penelope Jackson for the State Library of Western Australia and the Awesome Arts Festival.

Dame Lynley will be at Waikato Museum on Saturday February 16 from 10.30am – 12pm for a book signing session (maximum one book per person), followed by a question and answer session led by Ms Jackson from 1.30pm – 2.30pm (free event, registration required).

The Life and Times of Scarface Claw runs until 12 May 2019. Waikato Museum is open daily from 10am – 5pm and entry is free.