Morrinsville in 1993 remembered at Waikato Museum 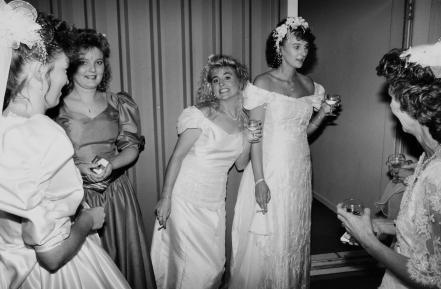 The heart of rural communities as well as the atmosphere, lifestyles, and culture of early 1990s New Zealand are celebrated in a nostalgic exhibition at Waikato Museum Te Whare Taonga o Waikato.

The free exhibition features 50 photographs taken in 1993 in Morrinsville, with the title referring to the Waikato town’s main street.

The photography team of Phil Crawford and Fraser Munro set out to record the day-to-day life of a rural community, with the town centre as the focal point.

The photos were first exhibited in Morrinsville in 1993 then travelled to galleries in Auckland, Manawatuu, Taupoo, Hastings, and Gisborne, and also published in a book titled Beyond Thames Street: Images of Small Town New Zealand by Mr Crawford and Mr Munro.

Waikato Museum exhibited the photographs in 1994/95, and was gifted the framed prints in 2001.

“Life in a rural town is far more down to earth than some city dwellers experience,” wrote Mr Crawford for the original exhibition. “People meet socially as well as in shops and businesses. Many have lived in the town all their lives, possibly in the same house.”

Waikato Museum Director Cherie Meecham says the exhibition shows an element of history removed from the major events of an era and which can’t be easily retraced online.

A quick Google search reveals the highlights of 1993 being the birth of swimming sensation Sophie Pascoe and future NBA star Steven Adams. UB40’s I Can’t Help Falling in Love with You was the number-one selling single and Jane Campion’s award-winning film The Piano was released. The National Party and Prime Minister Jim Bolger were re-elected as the Government. Closer to home, the Waikato rugby team ended Auckland’s eight-year Ranfurly Shield reign and beat the touring British and Irish Lions. Prime Minister Jacinda Ardern lived in Morrinsville at the time but isn’t among the people photographed.

“However, the character of everyday life can’t be researched or evoked as simply,” says Ms Meecham. “These photos featuring scenes from the town’s sports clubs, dance nights, workplaces, amenities and inside people’s homes offer a glimpse into ‘real’ life of the time.”

Reflecting on the 25 years since the photos were taken, Mr Crawford says: “In 1993 we thought the project would be representative of towns throughout the country. While we captured themes and fashions that were common, I now recognise that it is uniquely about Morrinsville due to the people we met and photographed. Seeing them in these images again is like meeting up with old friends.”

Mr Crawford and Mr Munro will be joined by Waikato Museum Curator Leafa Wilson for a free talk about the photos in the exhibition from 11am – 12pm on Saturday 2 February.

The final 15 copies of Beyond Thames Street: Images of Small Town New Zealand will be on sale during the exhibition.

Image: Jo-Anne Griffin, centre-right, and her attendant Victoria Dauphin have a last-minute cigarette at the Bride of the Year competition.

Click here for a high-resolution file of the image.