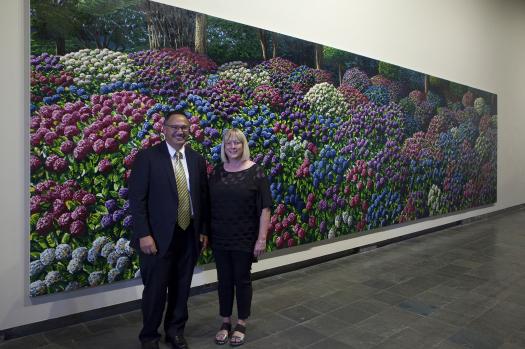 An epic painting by one of New Zealand’s most sought-after artists has been acquired by Waikato Museum Te Whare Taonga o Waikato thanks to support from Trust Waikato.

Maughan’s exhibitions regularly sell-out around the world and his work is held in many private and public collections, including Te Papa, philanthropic art organisation Fletcher Trust, and noted businessman and art collector Charles Saatchi (London).

Born in Wellington, Maughan has a strong connection to the Waikato through his mother who lived in Waikino, and her garden was one of the inspirations for Salamanca Road.

Valued at $240,000, the painting was purchased for $200,000 with funding from a strategic partnership between Waikato Museum and Trust Waikato.

The Trust generously donated its art and taonga collection to Hamilton in 2015 and the strategic partnership provides funding to grow the collection and keep or bring significant artworks to the region.

“Works such as Salamanca Road keep Waikato Museum’s art collection at a standard appropriate to a city the size of Hamilton,” says Ms Meecham.

“This purchase, for the benefit of Hamilton with no cost to ratepayers, would have been impossible without the generosity of Trust Waikato.”

Niwa Nuri, Trust Waikato Chair, says: “It is part of Trust Waikato’s ongoing commitment, in partnership with the Museum, to ensure important artworks and taonga are retained in the Waikato region. It is a real privilege to see such a significant piece has been purchased and will be accessible for the enjoyment of all.”

Waikato Museum has also purchased The Great South Road by Bob Kerr as part of the Trust Waikato partnership. The work comprises 11 panels, each representing important sites of the Waikato Wars, and cost $26,500.

“The Great South Road work depicts a, if not the, defining event in the history of the Waikato as well as being hugely significant in New Zealand history,” says Ms Meecham. “Accordingly, it was a work Waikato Museum could not ignore for its relevance to our region and community.”