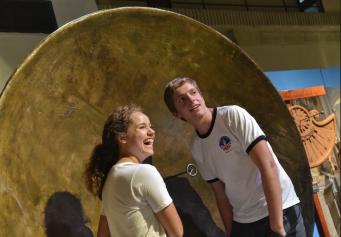 Visitors engage with the Parabolic Mirror for Sound interactive at the 2016 world premiere of Eureka: The Inventions of Archimedes at the U.S. Space and Rocket Center, (NASA Museum) in Alabama, USA.

An international touring exhibition exploring the creations of the father of modern science will open at Waikato Museum Te Whare Taonga o Waikato next month.

Waikato Museum is the sole New Zealand venue for Eureka: The Inventions of Archimedes, which details engineering feats which revolutionised the world during the Hellenistic era.

Developed by Italian exhibition studio Artisans of Florence, Eureka explores the mind of Greek scholar Archimedes of Syracuse, whose discoveries transformed the fields of mathematics, science and engineering.

Led by Archimedes, Greek mathematicians built lighthouses, harnessed the Sun’s energy using mirrors, and discovered ways to balance large objects in water (buoyancy) to build huge ships. Using geometry, they measured the Earth’s distance from the Sun, the size of our planet, and even tracked its movement around the Sun.

The exhibition allows visitors to explore Archimedes’ inventions through four themes – Machines of the Ancient World, Energy Machines, The Power of Shapes and Archimedes Legacy – with many of the displays built for hands-on interaction.

As well as in academic disciplines and modern technology, Archimedes lives in on popular culture – he is credited for coining the term eureka, which translates to ‘I found it’ in ancient Greek. Upon discovering the principle of displacement as he stepped into a bath, he suddenly leapt out and ran naked through the streets of Syracuse shouting the term.

Waikato Museum Director Cherie Meecham says Eureka follows on the heels of hosting the New Zealand premiere of the Permian Monsters: Life Before the Dinosaurs exhibition.

“It gives us great pride to be the first or only New Zealand venue to offer these world-class experiences to our visitors,” she says. “Eureka has fantastic links to many curriculum areas so we’re excited to see our galleries full of students learning from one of the greatest minds in human history.”