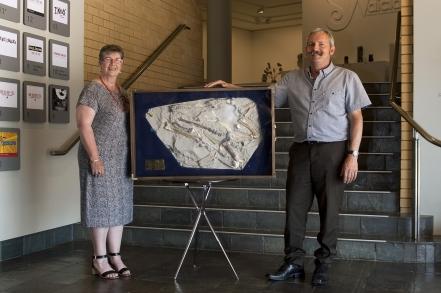 The junior naturalist club that discovered a fossil of an ancient giant penguin has been gifted a lasting keepsake of the amazing find.

Members of Hamilton’s Junior Naturalist Club (JUNATS) found the fossilised remains, estimated to be between 27 and 34 million years old, at Kaawhia in 2006.

Preliminary findings from initial analyses of the fossil suggest the giant penguin may have reached 1.5m in height and weighed as much as 100kg. By comparison, an emperor penguin stands at 115cm and weighs 30kg.

The fossil was placed in the care of the team at Waikato Museum Te Whare Taonga o Waikato and transferred into its permanent collection in 2017 to encourage research and further identification studies.

In recognition of the discovery and JUNATS’ generous transfer of the fossil, a three-dimensional, life-size replica has been produced for the club, with support from the Friends of Waikato Museum.

The model will be housed at JUNATS’ education hub, Te Kauri Lodge in Kaawhia, following a handover ceremony this Thursday, 18 January 2018.

Friends of Waikato Museum President Alison Gibb says the fossil is an important addition to the Museum’s science collection.

“The Friends of Waikato Museum are pleased to be able to acknowledge JUNATS’ miraculous discovery and be a part of this remarkable story,” she says. “I’m sure the model will motivate visitors to Te Kauri Lodge to continue scouring the foreshore for more hidden treasures.”

JUNATS President Mike Safey says the club is delighted to receive the replica.

“It looks incredibly like the real thing,” he says. “We hope it will inspire more young people to join our club to extend their scientific knowledge.”