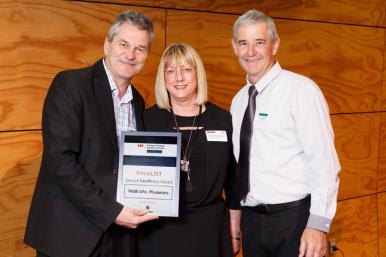 Waikato Museum’s commitment to providing a world-class visitor experience has been recognised with being named a finalist in the Service Excellence category of the Westpac Waikato Business Awards.

The awards are managed by the Waikato Chamber of Commerce, with the Service Excellence category acknowledging organisations that have succeeded through showing consistent dedication to superlative service and demonstrating commitment to the customer through its service policy, staff training and/or other specific means.

Entries are reviewed by a judging panel and potential finalists are further scrutinised through site visits by judges.

In 2017, Waikato Museum has been awarded the tourism industry’s highest level of quality assurance, the Qualmark Gold Sustainable Tourism Business Award, the TripAdvisor Certificate of Excellence, was highly commended in the hospitality/tourism category of the Hamilton Central CBD Awards and a double finalist at the ServiceIQ New Zealand Museum Awards.

“These amazing achievements can be attributed to a number of initiatives,” says Ms Meecham. “One of the desired outcomes of our five-year strategic plan is to be consistently rated as exceptional for customer service, and our visitor-focused culture is based on the principles of whanaungatanga (kinship/community), kaitiakitanga (guardianship) and manaakitanga (hospitality).”

The finalists were announced at a special event at The Gallagher Centre of Performing Arts, The University of Waikato.

Waikato Chamber of Commerce Chair Terry Wilson said the awards “acknowledge those in business not only proud of their people and what they do, but are also prepared to tell their story”.

“[The] finalists are the real-life examples of what our region aspires to be.”

Hamilton City Council Chief Executive Richard Briggs was named as a finalist in the CEO of the Year category, along with Agoge’s Andrew Nicol and Michelle Baillie from SkyCity Hamilton.

Waikato Museum is up against Premier Pavers, Foster Construction and last year’s winners Agoge in the Service Excellence category. The winners will be announced at a gala dinner on November 3.