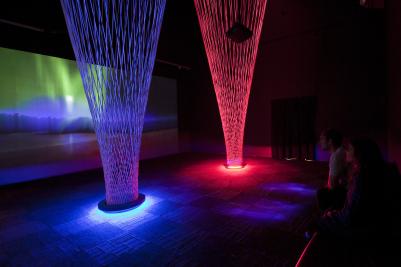 Te Whaanau Maarama is a finalist in the Excellence: Taonga Maaori and Most Innovative Use of Te Reo Maaori categories.

The exhibition is a collaboration with academics from the University of Waikato, and is supported by funding from Trust Waikato. It shines a light on the specialised subject of Maaori astronomy, and how it has been interpreted from oral histories, to pre-European Aotearoa and now in the 21st century.

Presented in three parts, visitors are taken on an immersive journey starting with a stirring audio visual show, followed by a thought-provoking selection of taonga tuku iho, and concluding with a social examination of the rise of Matariki in the last 20 years.

Te Whaanau Maarama’s innovative use of Te Reo Maaori lies in the integration of tikanga Maaori into the exhibition experience. Visitors are exposed to Maaori legend, tradition, architecture, music and history, to further convey the spoken and written language within the exhibition.

Waikato Museum Director Cherie Meecham is proud the exhibition has been recognised for its celebration of tangata whenua.

“Te Whaanau Maarama is a special project that highlights knowledge unique to New Zealand, the Maaori interpretation of the night sky,” she says.

“Waikato Museum is a community facility so to be up for these awards alongside the University of Waikato is extra rewarding.”

This is the second consecutive year Waikato Museum has been a finalist for taonga Maaori exhibitions. In 2016, it won the Best Regional Taonga Maaori Award for E Ngaa uri Whakatupu – Weaving Legacies, a tribute to Maaori weaving masters Dame Rangimarie Hetet and Diggeress Te Kanawa.