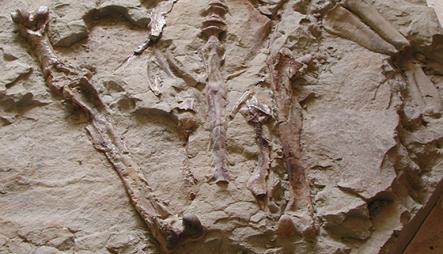 A 28-million-year-old fossil of a giant penguin discovered at Kawhia will officially become part of Waikato Museum’s science collection this Friday.

The Kawhia giant penguin was discovered by a group of young explorers from the Hamilton Junior Naturalist Club (JUNATs) at Te Waitere inlet in 2006. The fossil was embedded in a layer of rock called the Whaingaroa Formation, estimated to be 24-28 million years old.

Since its discovery, the fossil has been cared for by the team at Waikato Museum while on loan from the natural history group. The 2015 Waikato Museum exhibition ‘Giant in the North’ featured a three-dimensional scan of the fossil in an interactive display, allowing visitors to digitally explore its spectacular detail.

Preliminary findings from initial analyses of the fossil suggest the giant penguin may have reached 1.5m in height and weighed as much as 100kg. By comparison, an emperor penguin stands at 115cm and weighs 30kg.

The ancient species this penguin belonged to has yet to be determined, but the incorporation of the fossil into the museum’s collection will allow formal identification studies on the fossil to begin.

Waikato Museum Director Cherie Meecham says the museum is proud to have been chosen as the official kaitiaki (guardian) of the giant penguin fossil.

“The Kawhia giant penguin is a significant addition to our collection,” she says. “We are looking forward to seeing the results of the research that can now be undertaken, and learning more about its origin and identity.”

The transfer of the fossil to Waikato Museum’s permanent collection is thanks to the generosity of JUNATs, which was founded in 1962 for natural history enthusiasts aged 10 to 18.

JUNATs President Mike Safey says: “The JUNATs club is delighted to gift this important fossil, one of the best intact specimens in the world, to the Waikato Museum who have taken such good care of it. We’re now very keen to hear what the experts can tell us about this bird and period that it lived in. We hope this will inspire many more young people to get out there and explore what other secrets still lie hidden in the landscape so close to Hamilton.”

JUNATs members, iwi representatives, scientists and other invited guests are attending a hand-over event this Friday at the museum, where the deed of gift will be signed by both parties.