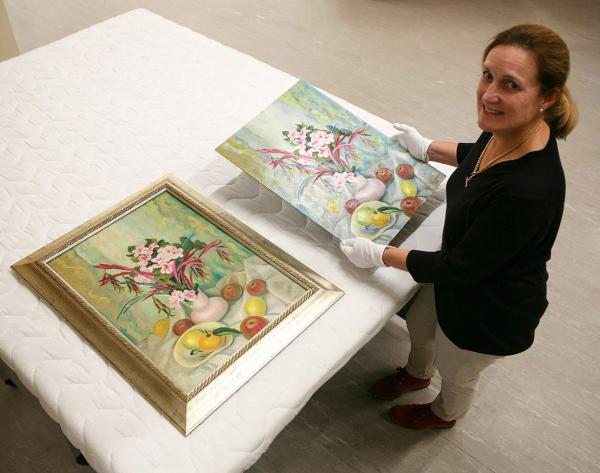 Image: Curator and art historian Penelope Jackson compares a copy of Floral Still Life, by Adele Younghusband with the original at Waikato Museum.

New Zealand has a history of art crime and guest curator and art historian Penelope Jackson exposes this in an intriguing new exhibition to open at Waikato Museum on 24 September.

The exhibition, An Empty Frame: Crimes of Art in New Zealand explores the different aspects of art crime; theft, vandalism and fraud in the form of forgery.

Jackson says art crime is far more widespread than we know and New Zealand is no exception where art crime is criminally punishable and often motivated by money.

"The exhibition will tell the story but the emphasis is 'what can we do to stop this?'", says Ms Jackson.

An Empty Frame is named after the elegant gold frame, left behind after the 1902 painting, Psyche by Solomon J Solomon was stolen from a Christchurch gallery in 1942. The famous frame now belongs to the Christchurch Art Gallery collection and is featured in the exhibition.

“Psyche is one of my favourite cases as it is full of intrigue. There is a sense of hope the exquisite gold frame will one day be reunited with the stolen painting, although it is highly improbable now”, says Ms Jackson, who clambered the wall to follow the trail of the thief or thieves only to discover that was not the way they achieved the heist at all.

The exhibition features 30 artworks, which all have at some stage been "victims" of art crime and each is accompanied by its own particular story.

One aspect of An Empty Frame intended to challenge visitors is the placement of a genuine artwork from the Museum’s collection alongside a fake.

Waikato Museum Director Cherie Meecham says it was surprisingly easy to arrange high quality reproductions of the originals for the purpose of the show.

“It's not illegal to produce a copy of a painting, but it is a crime to try to sell it as the original – it's essentially fraud.”

Closer to home, Hamilton has had its share of art crimes. Julia King’s 2010 award winning oil painting, Ohiwa Dunes, was stolen from Waikato Hospital in 2012 and never recovered. The Portrait of Te Haho, part of the Trust Waikato Art and Taonga Collection held at Waikato Museum, was found in 2012 not to have been painted by revered artist, Gottfried Lindauer and will be displayed in the exhibition. The artist remains unknown.

Ms Meecham says the museum is delighted to have a guest curator of Ms Jackson's stature overseeing the exhibition.

"Penelope is a brilliant writer, an award winner and an expert historian, and this is evident in the selection of artworks and the story we are telling through this exhibition."

An Empty Frame opens on 24 September until 8 January 2017. The exhibition is accompanied by a book, Art Thieves, Fakers and Fraudsters: The New Zealand Story (Awa Press). On Saturday 1 October, Penelope Jackson will give a free a public talk on art crime and forgery at 10.30am at the museum.